What's in my Oven?

Recently I watched Shark Tank and there was this woman on their speaking about something called the “squatty potty”.  She really caught my attention because she was speaking about having a hard time going poop.  (So many Americans have the same issue, due to diet and the way we use the rest room) Well, she then went on to say that her doctor suggested she try and squat to poop.  Long story short she ended up inventing a way for us to squat while sitting on the toilet.

Now, before you frown your face up, think about it…. how do we feel when we squat if we are having a tummy ache? I know I am not the only one who has felt relief after squatting??? When I was pregnant I actually use to squat to poop, it was just more comfortable for me, I always wanted my legs and knees up higher then the toilet and I never had a problem going.  I never thought there was an actual product out there for this though.  Look at this picture to see how much more sense it makes to squat when pooping.

It’s amazing how God makes our bodies to function a certain way and we always find a way to go against what he made for ease.  It’s funny, I was thinking about writing this blog just for information, and I was at a playdate, going on and on about this squatty potty and my girl Tracie says… “write a blog about it” LOL Do I have a squatty potty in my house, let’s just say I have a make shift one or two that I have been using. My kids have stools for washing hands and brushing teeth, so I have been using that to test it out. The BIGGER question is, has it worked?? I don’t have poop issues, yet I have still noticed that I have been going poop even faster than ever! I also feel like even more waste is being released with being in the squat position. I recommend everyone try this, especially if you have poop issues.

Anyone who knows me knows that I am all about natural remedies.  So before you go out and spend a bunch of money on pills and prescriptions and all that stuff that usually has side effects, try squatting as you GO!  Make sure you are getting your water intake and SQUAT! I’m sure most other countries still squat as they poop, I remember when I was still in the work field, I use to go into the restroom and there would always be these little footprints on the toilet. It all makes sense to me now.  Someone else that I know said that her ex use to squat on the toilet also, he was from another country.  We can stand to learn somethings from other countries! 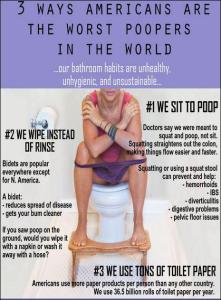 So if you are a guest, know you will be doing things the correct way! HAHAAHAHAH

Hope this helps someone!

4 thoughts on “Are you pooping the correct way?”