What's in my Oven?

Had no clue the house that we found via internet then used google maps to drive up and down the street, because we lived in California and the house was in Texas, had no clue, we’d say yes, let’s pursue buying it. Mind you we had searched and put in offers on other homes but the Lord had another plan. We even planned on ditching Texas altogether and took a trip to GA because I wasn’t content in Texas. (I wasn’t content because I hadn’t surrendered to what the Lord’s plan was.)  This would become the house we’d buy after living in it 2 1/2 years.  When you live in a house, apartment or whatever, and you are a creative being, but you can’t really touch anything, like paint, tear out the carpet add shelving or any of that wonderful DIY stuff you go kind of mad.

Anyway, the month that we closed on the house November 2015, I went to work. I had been looking at walls and everything in this house for so long, that I knew I was going to explode just a little when all deals were complete. I had been on pintrest sizing up every room and the first room I wanted to makeover was my boys. I had them sit down with me while I was on Pintrest so that they would be involved in the process. This is the result

Our boys decided on a skyline theme. Our oldest loves the color black but I was not about to paint their room black so this was the compromise. They absolutely love their new room, they say “it’s like being in a new house!” I had never really painted before, beside helping my husband paint his condon years prior, before we were “we” lol and I had definitely never made any kind of design on walls.

The walls were a cream color, so we painted them a light grey, only the upper half where the buildings would be. We let the paint dry over night, then I began the tape off. Once the tape was in place we began painting inside the tape.

Once the buildings were painted, I had to now tape off where we would paint windows. 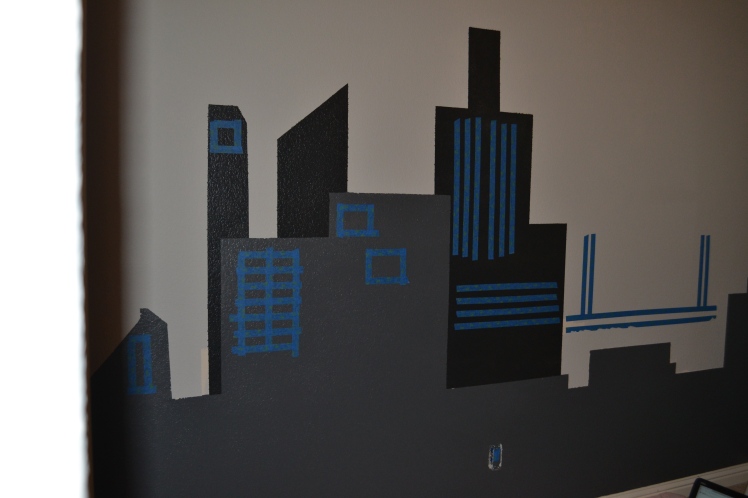 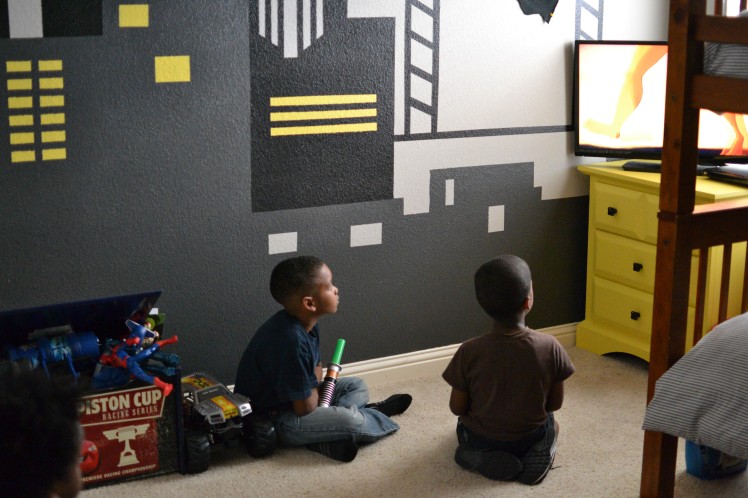 I had this end table, it was a dark brown, I mixed together some yellow paint with plaster of paris and water to get my chalk paint, added new pulls to it, to go along with the theme. Then went to Ikea, a store I never use to go to because EVERY piece of furniture we’ve bought there fell apart as soon as moved it, but we are ballers on a BUDGET and I wanted new bedding and everything that I was seeing was waaaaaay more than I wanted to pay and while searching online their color scheme, Ikea bedding popped up so we made a trip down there and won! YAY! Here’s their bedding.

I want to and may paint their beds, but for now I am content, and the boys could care less. I am an artist in my own right, but by no means a professional, I do like to inspire others to DIY, craft, cook and all that wonderful stuff. God made us more than able, so let’s do it! You may be nervous at first, I was, but it is so gratifying in the end!